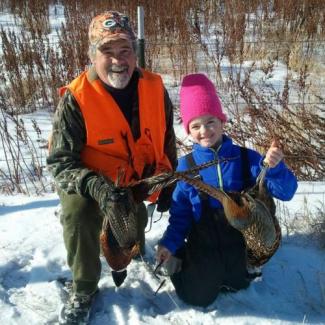 Associate Professor
Ohio State University School of Environement and Natural Resources
614-352-5825
Robert J. Gates is Associate Professor of Wildlife Ecology and Management in the School of Environment and Natural Resources at Ohio State University. Bob grew up and began hunting with his father in east central Wisconsin, after which his family moved to the hunting paradise of eastern South Dakota, where he received his B.S. in Wildlife Science from South Dakota State University. Bob’s graduate degrees were from Montana State University (M.S.) and Southern Illinois University at Carbondale (Ph.D.). Bob’s travels have provided many memorable hunting, fishing and other outdoors activities that he has shared with family and friends in 19 states/provinces in the U.S. and Canada. He is most proud of passing on the hunting and fishing traditions to his younger brother Dale, and to his sons Eric and Jared. Bob is an avid bird hunter who most enjoys hunting pheasants and prairie grouse over pointing dogs (especially Brittanys) and also hunts doves, waterfowl and big game. Bob has taught classes and conducted research with graduate students for nearly 30 years, first at Southern Illinois University, and currently at Ohio State University. His research interests are primarily focused on ecology and management of upland game birds, waterfowl and other wetlands-dependent wildlife, and conservation of wetlands and early successional habitats. He has been a member of The Wildlife Society (TWS) for more than 30 years, serving as state chapter president in Illinois and Ohio, and President