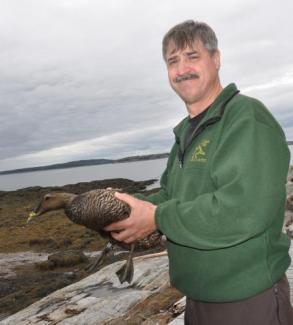 Wildlife Biologist, Wildlife and Sport Fish Restoration Program, Northeast Region
US Fish & Wildlife Service
413-253-8706
Chris is currently a Wildlife Biologist with the USFWS Wildlife & Sport Fish Restoration Program in the Northeast Region. Previously, he served as the Regional Chief of Hunting & Fishing (2017-19) and Migratory Game Bird Biologist for the USFWS, Northeast Region (2006-17), working with State and Federal partners in the U.S. & Canada to support science-based conservation and harvest management of migratory game birds. From 1996-2006, Chris served as a Wetland Wildlife and Furbearer Biologist with the Ohio Division of Wildlife (ODOW), where he developed research, monitoring and public communication programs to improve furbearer management within the State. He also served as the State Coordinator in the testing and development of Best Management Practices for Furbearer Traps and Trapping in the U.S. His efforts also led to the first regulated trapping season for river otters in Ohio following their successful reintroduction in the early 1980’s, built around strong science and communication efforts within the agency, and more importantly, with the public. Prior to working with ODOW, he was employed as a Wildlife Research Biologist with the MO Dept. of Conservation and the U.S. Dept. of Agriculture, Wildlife Services, and Wildlife Technician with the U.S.G.S., Northern Prairie Wildlife Research Station. Chris is also a volunteer Trapper Education instructor with the Massachusetts Division of Fisheries and Wildlife Hunter Education Program.