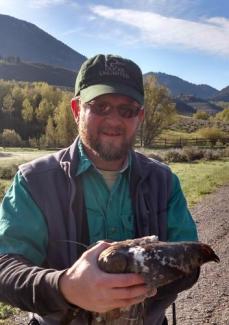 Assistant Professor
Utah State University
Dave is an Assistant Professor in the Department of Wildland Resources at Utah State University (USU), Logan, UT. Dave's appointment consists of Extension and research responsibilities, where the majority of work is focused on wildlife and rangeland issues with an emphasis on grouse conservation. He completed his BS, MS, and PhD degrees at USU, where his graduate work focused on sage-grouse. Following some post-doctoral work he joined the Kansas Department of Wildlife, Parks, and Tourism as the Upland Game Specialist managing statewide populations of pheasants, quail, prairie-chickens, and turkeys. He grew up in Bismarck, North Dakota, where he spent many days studying "the impact of high speed spherical lead objects and canine pursuit on the mortality rates of upland game birds." His love for hunting is kept alive by his German Shorthaired Pointers who he tried to get out hunting and conducting research with as often as possible. Dave also has a lovely wife and 3 young daughters who keep him on his toes and grounded. He appreciates those who have not been exposed to hunting but who want to understand the role hunting plays in conservation. He's especially aware and thankful for the rich history hunters have contributed to North American wildlife conservation.