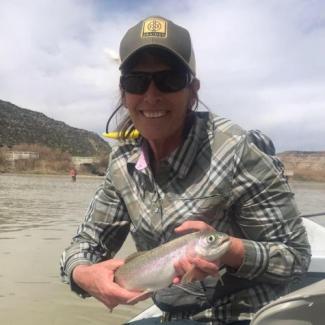 Director of Conservation Operations, Western Wildlands
National Wild Turkey Federation
303-775-6902
LinkedIn Profile
Patt Dorsey is a native Coloradoan and a graduate of “the” Colorado State University. She became a "member of the flock," joining the National Wild Turkey Federation in February of 2019. As the Director of Conservation Operations for the West Region, she supervises biologists and R3 coordinators in 9 Western States. She was drawn to the NWTF because working on forest and watershed health is an increasingly important and urgent issue and the NWTF is implementing on-the-ground solutions with local partners. Before that, she held several positions with Colorado Parks and Wildlife (Boulder district wildlife manager, Hunter Education Administrator, area wildlife manager in Durango and a member of the Director's staff -- Southwest Region Manager). She was recognized as Colorado's Shikar Safari Wildlife Officer of the Year in 2012, presented with the International Hunter Education Association Past President’s Award in 2004, the Jim Jones Outstanding Employee Award in 2000, Most Creative Idea Award in 2008, Teamwork Award and Most Positive Employee awards in 1995.