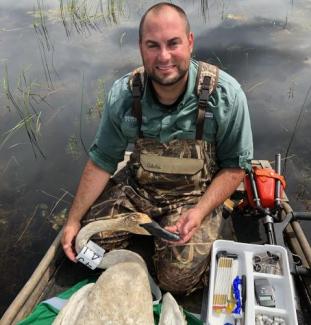 Wetland Habitat Biologist
Michigan Department of Natural Resources
5743601652
LinkedIn Profile
Randy is a Wetland Habitat Biologist within the Wildlife Division of the Michigan Department of Natural Resources. Randy works with partners to deliver waterbird and wetland conservation in Michigan by securing funding, assisting with research, and co-administering a voluntary wetland restoration program with Michigan's Department of Environment, Great Lakes, and Energy. He is an Indiana native, but considers himself to be a Michigander by default since he spent the majority of his life on the water at his family’s lake cottage in Van Buren County. He was introduced to wildlife conservation by chasing cottontails and whitetails in the fields of the Midwest with his father and uncle. He continues to explore public lands across the United States each year in search of adventure, challenge, and food. Randy received his Bachelor’s degree at Purdue University, completed his Master’s degree at Ohio State University researching northern bobwhite, and obtained his Ph.D. at Michigan State University studying movements and demographics of mute swans. Randy began as an Intern with CLfT in 2009 and has been instructing at workshops since 2010.