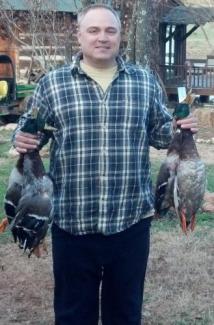 Hunter Development Program Manager
GA-DNR Wildlife Resources Division
770-761-3010
Walter Lane is the Hunter Development Program Manager for the Georgia Department of Natural Resources (GA-DNR). Walter has been a CLfT Instructor since 2009. He graduated from North Carolina State University in 1996 with a B.S. again in 1999 with a M.S. degree in Fisheries and Wildlife Science. He began working as a wildlife biologist with the GA-DNR in 1999 and worked on a habitat restoration project for northern bobwhite quail and other grassland songbirds. In 2001, Walter became the Project WILD Coordinator for Georgia and held that position for seven years before taking over as Program Manager of the Charlie Elliott Wildlife Center in 2007. Walter became the Hunter Development Program Manager for GA-DNR in 2010. Walter began hunting squirrels, doves, and deer with his uncles when he was a boy and has retained a passion for hunting, fishing and other outdoor sports. He began hunting waterfowl and turkeys after moving to Georgia in 1999. Walter has been married to a smokin' hot blonde from the NC Mountains for 12 years and they have two young boys who ensure there is never a dull moment in their lives.